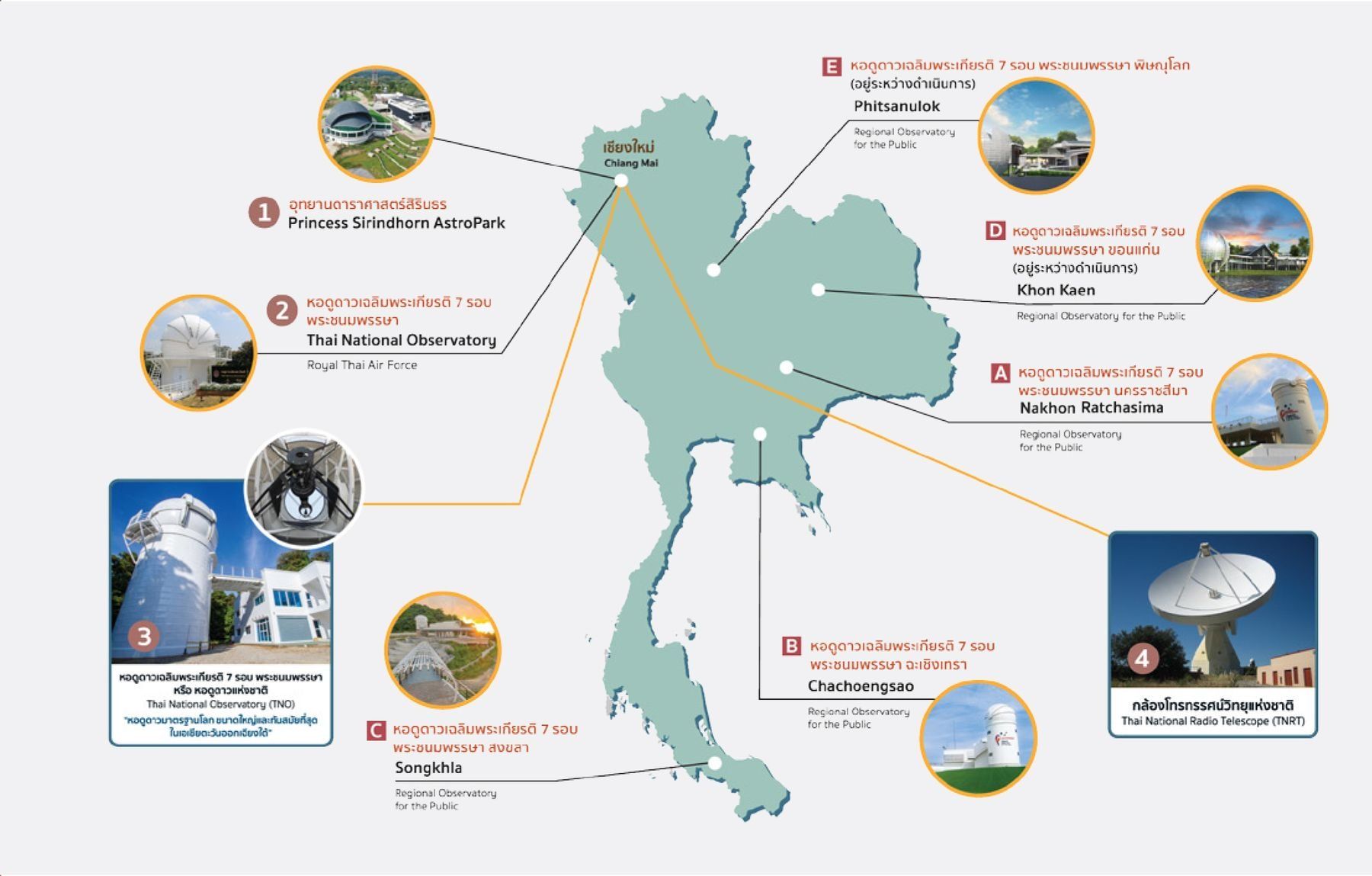 In addition to the main National Observatory at Doi Inthanon, NARIT has been committed to establish 5 more regional observatories scattered through the five geographical zones of the country. These observatories, though modest in scale comparing to the main National Observatory, will allow the public in the areas and nearby districts to gain better access to information in astronomy and space technology. Consequently, this will strengthen the infrastructure of the nation?s capacity in astronomy and space technology and will contribute to capacity building in education and even research in the field in the long run. It is speculated that through these regional observatories, collaboration and cooperation between the well established in big cities and the rural ones will substantialize.

The five regional public observatories will be situated in Nakorn Ratchasima, Khon Kaen, Chachoengsao, Pitsanuloke and Songkla, representing the lower north eastern, the upper north eastern, the eastern, the lower northern and the southern parts of Thailand respectively. Each of the so-mentioned public observatories is equipped with a 0.5 meter telescope, a CCD camera, and a spectrograph. Most of them are expected to operate in their full capacities not later than 2015.

The already existing observatory in the North, Sirindhorn Observatory, has become a alliance of NARIT observatories in early 2009.

Regional Observatories for the Public (ROPs)

The Regional Observatories for the Public is the project initiated by HRH Princess Maha Chakri Sirindhorn, and was hence bestowed upon the official name ‘Chalermprakhiat Astronomical Observatory Commemorating King Bhumibhol's 7th Cycle Birthday Anniversary’ followed by the name of respective province where the observatory is situated. Under the mission to raise awareness on science and technology across different regions in Thailand for the Thai people to have equal access in learning astronomy, the ROPs will act as learning centres in astronomy for local communities and schools, to support astronomical academic services in school’s curricula and become the modern astro-tourism attractions of the region. The Regional Observatories for the Public now fully operate in 3 different locations namely Nakhon Ratchasima, Chachoengsao and Songkhla.

The Regional Observatories of the Public are among the top state-of-the-art astronomical facilities, equipped with advanced capacity to provide academic services for students and the general public across all regions in Thailand. The ROPs can also provide support for astronomy education and other related fields in order to raise awareness and create astronomy enthusiasts and scientists, strengthen research and academic networks for knowledge-based society and sustainable development.

Regional Observatories for the Public (ROPs)

From the advancement of science and particularly, astronomy in the present days, combined with the emerging enthusiasm from students and the public towards astronomy, the National Astronomical Research Institute of Thailand (Public Organization) realizes the importance of astronomy education in all school levels to graduate programs. NARIT has thus established 5 Regional Observatories for the Public to be the learning centres and research works in astronomy, as well as the hubs for knowledge transfers to schools, universities and the societies for their precise understandings in astronomy, and ultimately being able to adapt these knowledge into the curricula and everyday lives.

The Cabinet consensus has granted permission to the National Astronomical Research Institute of Thailand (Public Organization), Ministry of Science and Technology (then) to establish the Regional Observatories for the Public Project on 24 March 2009. 3 of which have been completed and in full operations namely ROP Nakhon Ratchasima, ROP Chachoengsao and ROP Songkhla, while the other 2 are under construction process.

Each ROP is equipped with an observatory, which houses the 0.5-m telescope and the 14-inch telescope. A number of smaller telescopes for research works such as CCD Camera, Spectrograph and other astronomical equipment are also available for public services from NARIT Public Night to advanced research conducted by teachers, students and researches across the regions. Apart from research equipment, the ROP also houses a planetarium for astronomical and space multimedia shows for students and general public to visit and gain knowledge and full understanding about the sky, near-earth objects and effects from climate change such as Solar Storms.

In the mere future, ROPs will link all astronomical data to the 2.4-m telescope at Thai National Observatory (TNO) atop Doi Inthanon Mountain in Chiang Mai. This will enable ROPs visitors to access data insights from the aforementioned TNO.