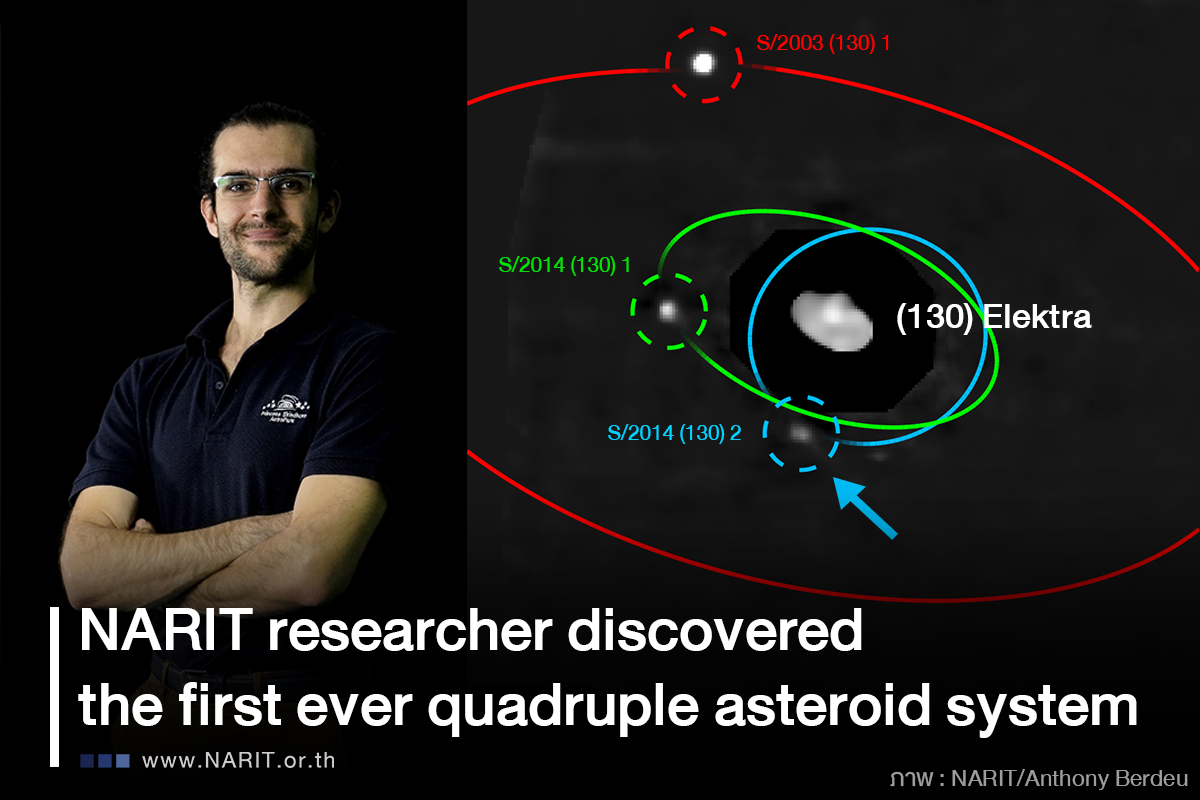 Dr. Anthony Berdeu, a postdoctoral researcher of NARIT and Chulalongkorn University presents this research in his letter “First observation of a quadruple asteroid. Detection of a third moon around (130) Elektra with SPHERE/IFS” published in the journal Astronomy & Astrophysics that went online today (8 February 2022)[1]. This paper describes the discovery of the third moon orbiting around the asteroid 130 Elektra using data obtained from the SPHERE/IFS bumping the number of moons orbiting around this asteroid up from 2 to 3, making this the first known quadruple asteroid system.

SPHERE/IFS is a set of instruments on the Very Large Telescope (VLT) operated by the European Southern Observatory (ESO) located at the Cerro Paranal in the Atacama Desert in Northern Chile. The Spectro-Polarimetric High-contrast Exoplanet REsearch instrument (SPHERE) and its Integral Field Spectrograph (IFS) is a high-contrast and high-resolution imaging instrument designed for direct-imaging of extrasolar planets. It can simultaneously observe the image of an object and its spectrum.

An important obstacle of any ground-based telescope comes from the turbulent atmosphere of the Earth. Light that is collected through the VLT’s main mirror first passes through an adaptive optics (AO) system that constantly monitors the fluctuation of light from the observed object due to the atmospheric distortion. Then, thousands of actuators make a real-time correction to a deformable mirror to compensate for the distortion over a thousand times every second. This enables us to obtain a much sharper image than would otherwise be possible as atmospheric distortion is partially eliminated. Essentially, this puts a ground-based telescope closer to being in space.

Focused light then enters the IFS system that splits light via a system of lenslet arrays that focus light from individual loci before light is further split into spectrum. By splitting light into spectrum helps tremendously in identifying the light from faint planets apart from the bright parent star. However, this comes with a tradeoff with a much more complicated data reduction step to extract the spatial and spectral information from the raw data of the sensor.

>>Events leading to the discovery

In 2019, while still a post-doctoral researcher at UJM-Saint-Etienne, Berdeu developed a new algorithm to process data from SPHERE/IFS using a method called Projection, Interpolation, and Convolution (PIC). He has demonstrated that this pipeline has some advantages over the current ESO’s data reduction pipeline and has published his result in a paper back in 2020[2]

Based on the result, he was able to confirm the two moons that Yang et al. had previously discovered back in 2014. Moreover, he noticed a possibility for a third moon orbiting around 130 Elektra. He subsequently applied the same pipeline to further observations of 130 Elektra with the datasets on the nights of 30th and 31st of December 2014 to verify this discovery. However, the faint light from the moon remained undetectable due to the bright halo from the main asteroid 130 Elektra, making it impossible to ascertain the existence of the third moon in the subsequent datasets.

In 2021, after Berdeu had taken a postdoctoral researcher position at NARIT, he had a chance to revisit this dataset once more. He developed another algorithm to reduce the halo light from the main asteroid by first estimating how the light has spread within the instrument known as the “Point Spread Function (PSF)” by comparing it to the brightest moon of 130 Elektra. Then, he used the estimated PSF to recover an image of 130 Elektra. From this estimate, he was able to model the shape of the main asteroid halo in order to carefully remove it from the data.

The result has clearly revealed all the three moons next to the asteroid 130 Elektra. More importantly, this same algorithm can be applied to the datasets obtained on the 30th and 31st of December and confirm the existence of the third moon in all images. This shows that this signal was not an artifact but indeed a third moon revolving around 130 Elektra. Marking 130 Elektra the first confirmed quadruple asteroid system.

Currently, there is no naming convention for moons of asteroids and the IAU’s Minor Planet Center only names moons of asteroids by the year of observation followed by the numerical code of the asteroid and the order of the moon at which it was discovered. For this reason, this newly discovered moon has received the official designation as “S/2014 (130) 2”

These three observations enable Berdeu and his colleagues to verify that this third object is indeed gravitationally bound to the 130 Elektra. The moon is discovered to be orbiting around the asteroid with a semi-major axis of 344 kilometers (130 Elektra has an average of 200 km in diameter) and orbits around the parent body every 16.3 hours. The moon has a rather surprisingly inclined orbit compared to the two other moons and the rotation axis of its parent body.

What makes this discovery rather remarkable is that it uses the same dataset that allowed astronomers to discover the second moon. However, this third moon has eluded the discovery so far and it is impossible to be observed using ESO’s regular data-reduction pipeline. Berdeu explains that due to his background in data science, he was able to consider the analysis from an instrument and data reduction perspective simultaneously. The PIC and halo removal algorithms, based on an inverse problem approach, have enabled him to address and model the instrument’s PSF directly and be able to eliminate some of the artifacts that would normally arise as a result of the usual data reduction pipeline. The new algorithm, on the other hand, can further expand the instruments capability and allow us to observe the faint signal from the third moon.

This discovery is not only the discovery of a new object in the solar system and first quadruple asteroid system ever found, but it also opens up a new window of possibilities for new methods of data reduction and discoveries. If Berdeu did not apply the new algorithm to the 130 Elektra dataset we still would not be aware of the third moon today. It remains to be seen how many new objects and discoveries still await among the mountains of archival data collected by instruments such as SPHERE.

The National Astronomical Research Institute of Thailand (NARIT) is a world-class organization with a multinational workforce that employs researchers from over 11 different nationalities. Anthony Berdeu is a postdoctoral researcher currently engaged in the development of new high-contrast imaging technologies including NARIT’s EvWaCo (Evanescent-Wave Coronagraph)[4] project, that could soon be the new coronagraph technology that enables us to directly observe exoplanets. He also leads NARIT’s new Adaptive Optics system currently in development to be installed at the Thai National Observatory (TNO). 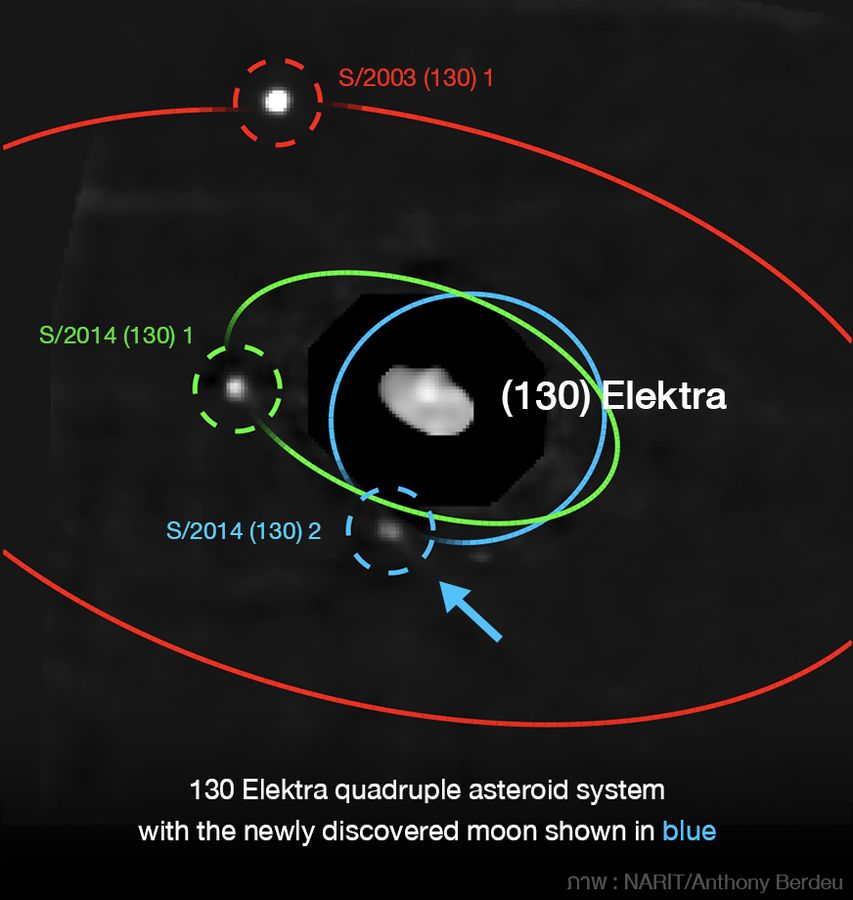 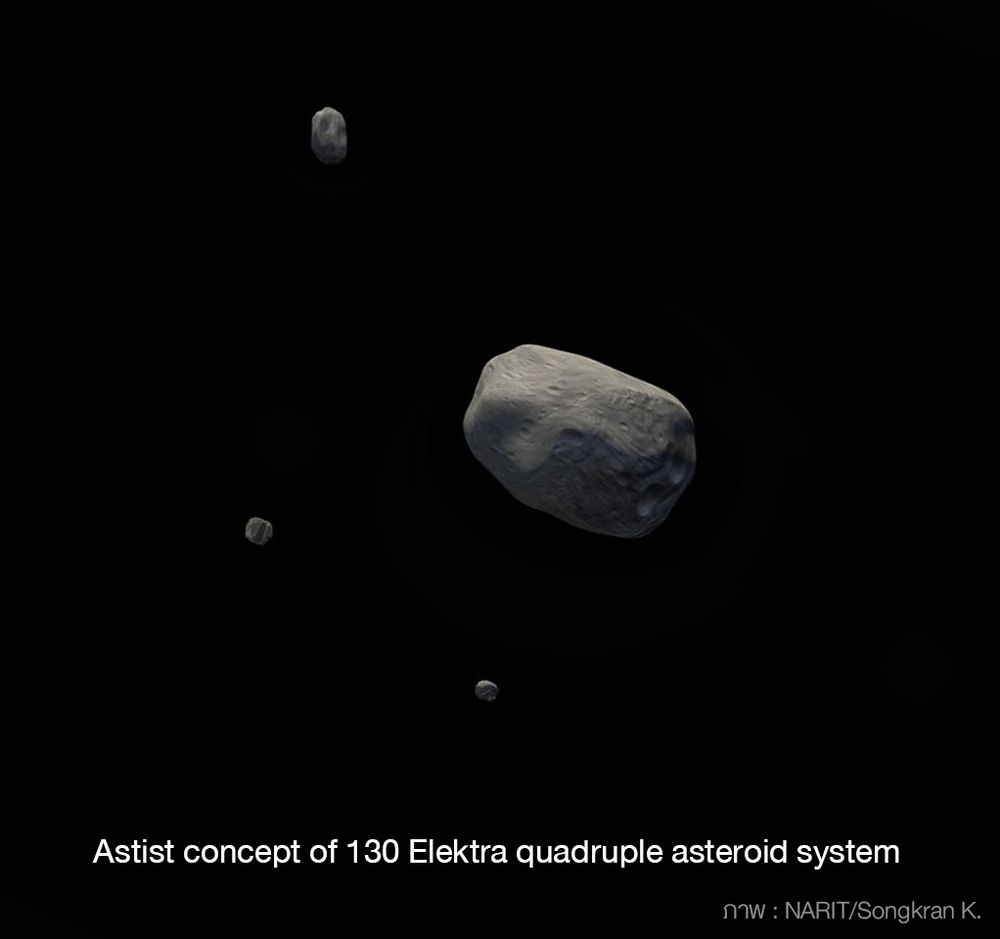 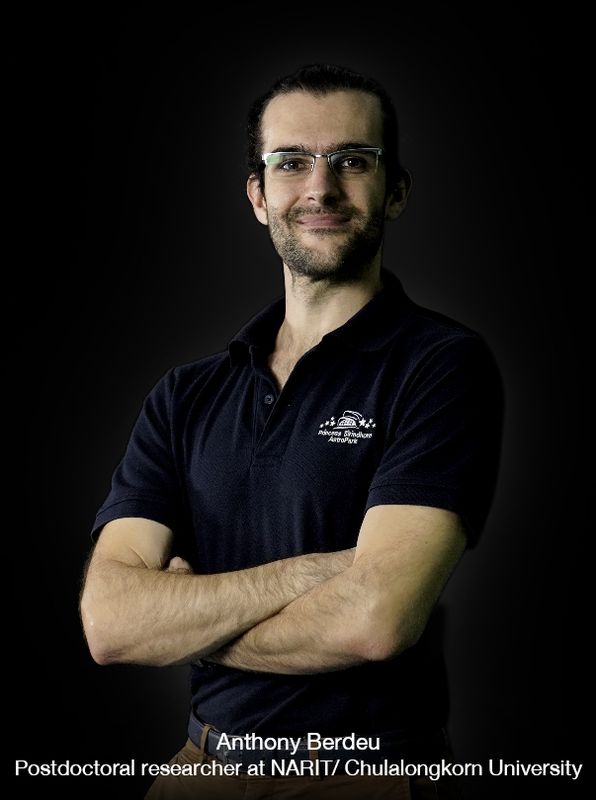 E-mail: This email address is being protected from spambots. You need JavaScript enabled to view it.   Website : www.narit.or.th