For decades, we have been searching for intelligent life beyond Earth by pointing radio receivers and telescopes into the sky. The mere existence of the Earth, a rocky planet within the habitable zone of the Sun, could provide motivation for extra-terrestrial observers to send signals to or to listen for signals from the Earth. A team lead by Dr Supachai Awiphan from the National Astronomical Research Institute of Thailand (NARIT) in collaboration with researchers from Hokkaido University, the University of Manchester, Chiang Mai University and Observatory de Besancon suggested that the Earth is well-hidden and could be detected by other civilisations through photometric microlensing only 14.7 times a year. 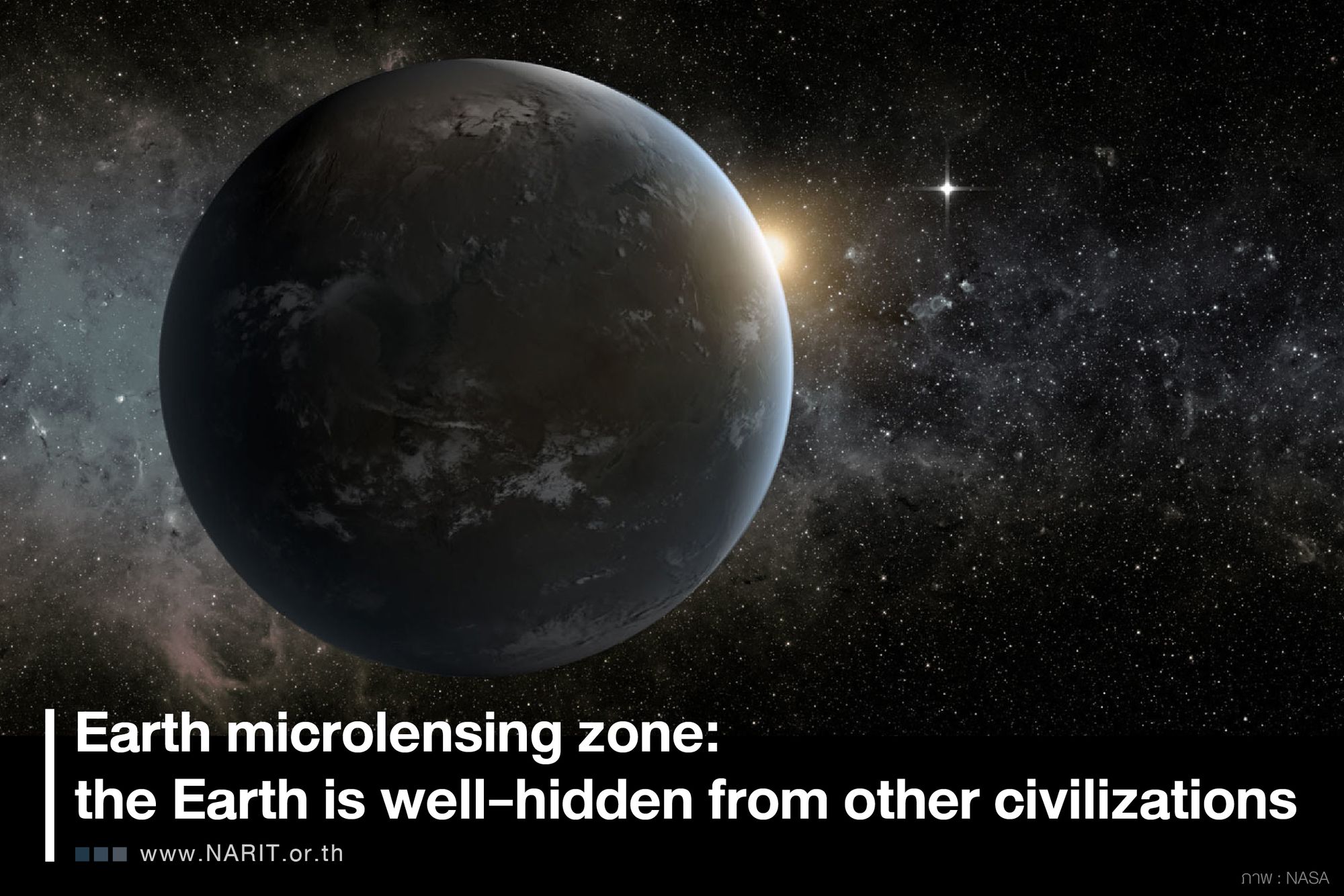 To date, thousands of exoplanets have been found. With our current technology, microlensing technique is the best method to detect distant planets located around the most common stars in our Galaxy. In theory, a long range detection method like microlensing could be employed by technological civilisations to detect the Earth across Galactic distance scales. Locations from which Earth may be detectable are considered to be good candidates for targeted SETI surveys, in which case Earth's microlensing signature could make even distant stars worth considering for such surveys.

In this research, by assuming that all stars are equally likely to host a technological civilization, the Earth microlensing detection probability to other civilisations and rates at which they may discover us are provided using the stellar brightness and distances from the Gaia DR2 catalogue. From billions of stars in the Milky Way Galaxy in the catalogue, the total Earth discovery rate is shown to be only 14.7 observers per year. This result shows that the Earth is in fact well-hidden to observers with technology comparable to our own.

The team defined the areas of our sky from which Earth's microlensing signal might most likely be detected by other technological civilisations to be the “Earth Microlensing Zone'' (EMZ). They found the optimal regions to be located at low Galactic latitude near the Galactic centre, the Large Magellanic Cloud and the Small Magellanic Cloud. These areas are worth considering for targeted SETI surveys based on the Mutual Detectability approach, as the human might detect signals from extraterrestrial intelligent observers in the area.

From more than 5,000 current known exoplanets, 85 of them are located in the EMZs. MOA-2007-BLG-192L provides the highest discovery rate among known exoplanetary systems. A planet in this system, MOA-2007-BLG-192L b, is a super-Earth orbiting a very low mass late-type M-dwarf. However, this planet might be too cold as it locates beyond the snow line of its M-dwarf host star. The planetary system ranked second in the list is GJ 422. The system has a Neptune-like exoplanet, GJ 422 b. Although the exoplanet is a Jovian planet, rocky moons orbiting around it can host life. With the distance of 13 pc from the Earth, the radio signature from GJ 422 b can be detected easily on the Earth.

Earth discovery rate map using photometric microlensing technique from other technological civilisations marked with confirmed exoplanets. The total Earth discovery rate is shown to be 14.7 observers per year over the entire sky. 85 confirmed exoplanets are located within the areas of sky from which Earth's microlensing signal might most likely be detected by other civilisations called the “Earth Microlensing Zone'' (EMZ).