Summary : An international collaboration via Very long Baseline Interferometer (VLBI) network KaVA (KVN and VERA Array) report the first observational results detailing complex outflow structures in a high-mass star-cluster forming region G25.82-0.17 by combining follow-up data from the international project, ALMA (Atacama Large Millimeter/submillimeter Array), as one of the KaVA large programs investigating star-formation under collaboration of the Mizusawa-VLBI Observatory of NAOJ (National Astronomical Observatory of Japan) with KASI (Korea Astronomy and Space Science Institute). The results demonstrate that newly born high-mass stars in G25.82-0.17 were likely formed in a similar manner to Solar-type low-mass stars. The present study is the first step toward larger-scale EAVN (East-Asian VLBI Network), in which the 40-m Thai National Radio Telescope by National Astronomical Research Institute of Thailand (NARIT) will be collaborating in the large program investigating star-formation in the near future.

High-mass stars, which have masses more than 8 times that of the Sun, play important roles in the production of heavy elements and in driving the evolution of galaxies by their strong radiation field and supernova explosion. However, the population of high-mass stars is much smaller than that of Solar-type low-mass stars. Furthermore, high-mass protostars, which are newly born baby stars, are in general formed in far distant star clusters and hence, observational studies are challenging given the required high sensitivity and resolution. Until now, there still remains many unresolved issues for understanding of high-mass protostars. 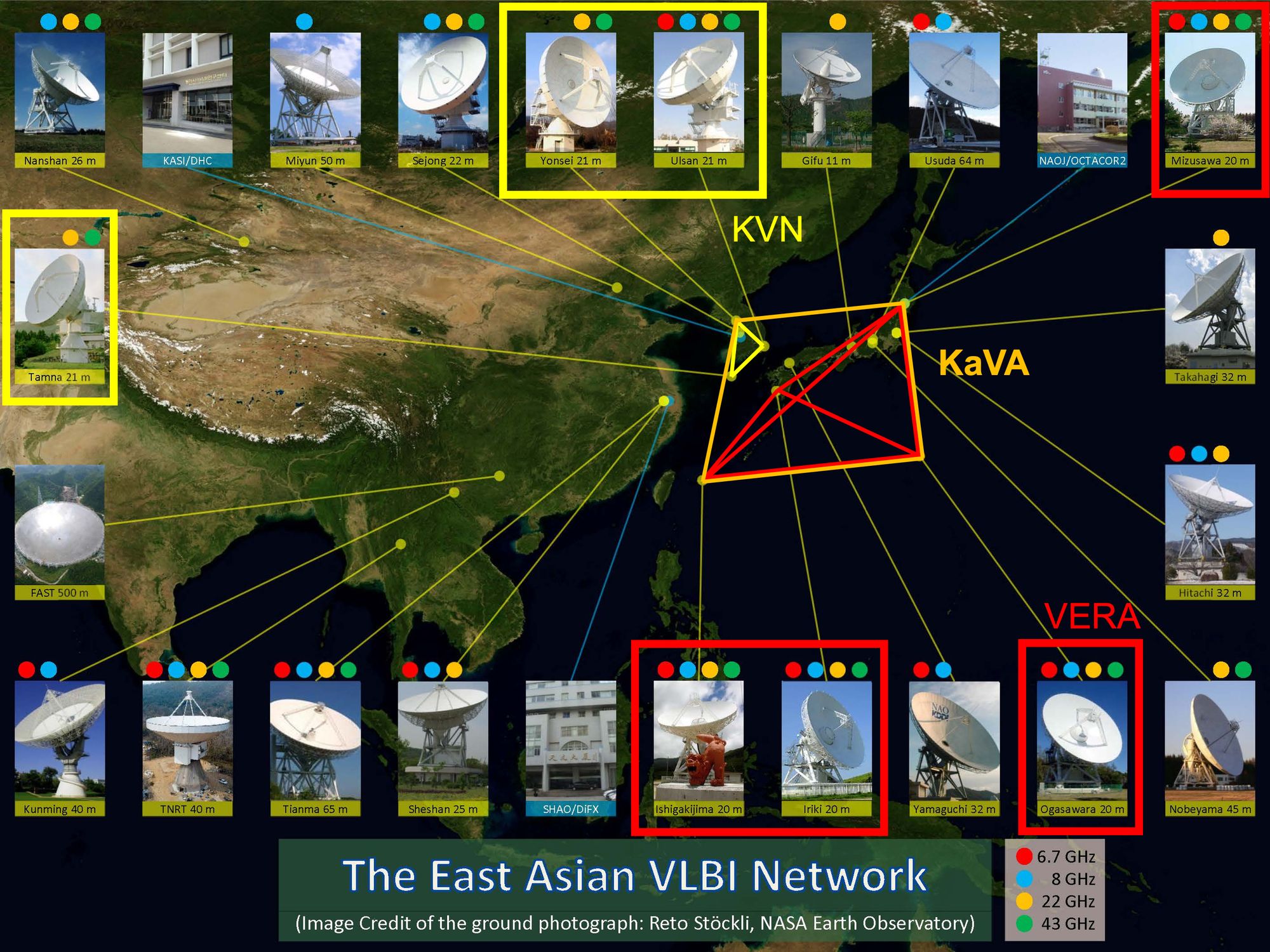 Figure 1：Array configuration of the VLBI networks in East-Asia. KaVA is a combined array of VERA in Japan and KVN in Korea. There are four 20 m radio telescopes in VERA, Oshu-shi in Iwate (Mizusawa), Satsuma-Sendai-shi in Kagoshima (Iriki), Ogasawara-mura in Tokyo, and Ishigaki in Okinawa. In Korea, there are three KVN 21 m radio telescopes in Seoul, Ulsan, and Seogwipo (in Jeju island). KaVA can achieve the comparable resolution with the size of 2300 km corresponding to the longest baseline length between Mizusawa and Ishigaki. KaVA is now growing to the more powerful network, East-Asian VLBI Network (EAVN), under collaboration with China, Japan, Korea, Thailand, etc. © 2020- The EAVN Collaboration

The present study is the first result from one of the KaVA large programs entitled “Understanding high-mass star formation through KaVA observations of water and methanol masers”（https://radio.kasi.re.kr/kava/large_programs.php） started in 2015. “Maser” is a strong radio emission line similar to “laser” in optical wavelength. Because of its strong and compact nature, it is one of the most ideal tools to investigate close vicinity to newly born stars with radio interferometers. By combining the long-term (3 years, devoting 200 hours/year) systematic observations by KaVA and other ancillary data such as ALMA (Atacama Large Millimeter/submillimeter Array) operated under an international collaboration including NAOJ and KASI, we aim to address key questions: “how high-mass stars collect their large amount of mass from their surrounding media?” and “how high-mass protostars drive high-velocity outflows and form surrounding circumstellar rotating disks as predicted by star-formation theories?”

Target source in the present study

Here we focus on one of the 25 targets for our KaVA large program, G25.82-0.17. It is located at the distance of 16,000 light year away from the Solar system toward the direction of Scutum, which is in the Milky Way between the constellations of  Sagittarius and Aquila. G25.82-0.17 was found to show relatively strong maser lines emitted from a large velocity range. Furthermore, our ALMA follow-up observations revealed its complex structures in detail. Thus, G25.82-0.17 is the most suitable for the first case studies in our program.

From the ALMA data, G25.82-0.17 is found to be a young high-mass cluster hosting a newly born protostar G25.82-W1 (ID number 1 of a Western source of G25.82(-0.17)), high density cores at an evolutionary stage prior to the onset of star-formation, and an evolved ionized region (Figure 2). A radio line emission from hot gas in G25.82-W1 shows a signature of rotation. Based on an equilibrium between centrifugal force due to rotation and gravitational force (Kepler’s law), the enclosed mass is at least 25 times that of the Sun, implying that it is indeed a high-mass protostar.

We detect a high-velocity outflow at 50 km/s emanating from G25.82-W1 toward north and south (upward and downward; Figure 2). Overall, a system containing an outflow associated with rotating gas (perhaps related to a circumstellar disk) seems analogous to those of low-mass protostars. “This study untangled the complicated structure of a high-mass cluster-forming region and showed that a high-mass star in G25.82-0.17 is forming in a similar manner to Solar-type stars.” commented Kee-Tae Kim (director of radio astronomy division in KASI), a Korean co-chair of the KaVA large program for star-formation studies, on the significance of the present study.

At a region closer to G25.82-W1, there is a group of water maser emission observed with KaVA (Figure ３). In contrast to the north-south outflow extending to 50,000 au (astronomical unit), the distribution of the water masers is only within 1,000 au from G25.82-W1 (although it is 20 times larger than the distance between the Sun and Pluto). The water masers are excited at the base of the large-scale outflow. “Further data analysis is ongoing to investigate the 3-dimensional gas motion using data from KaVA monitoring observations. It will give us a big clue to understanding the driving mechanism of the discovered outflow”, said Jungha Kim (graduate student in SOKENDAI), the principal investigator of the present study. 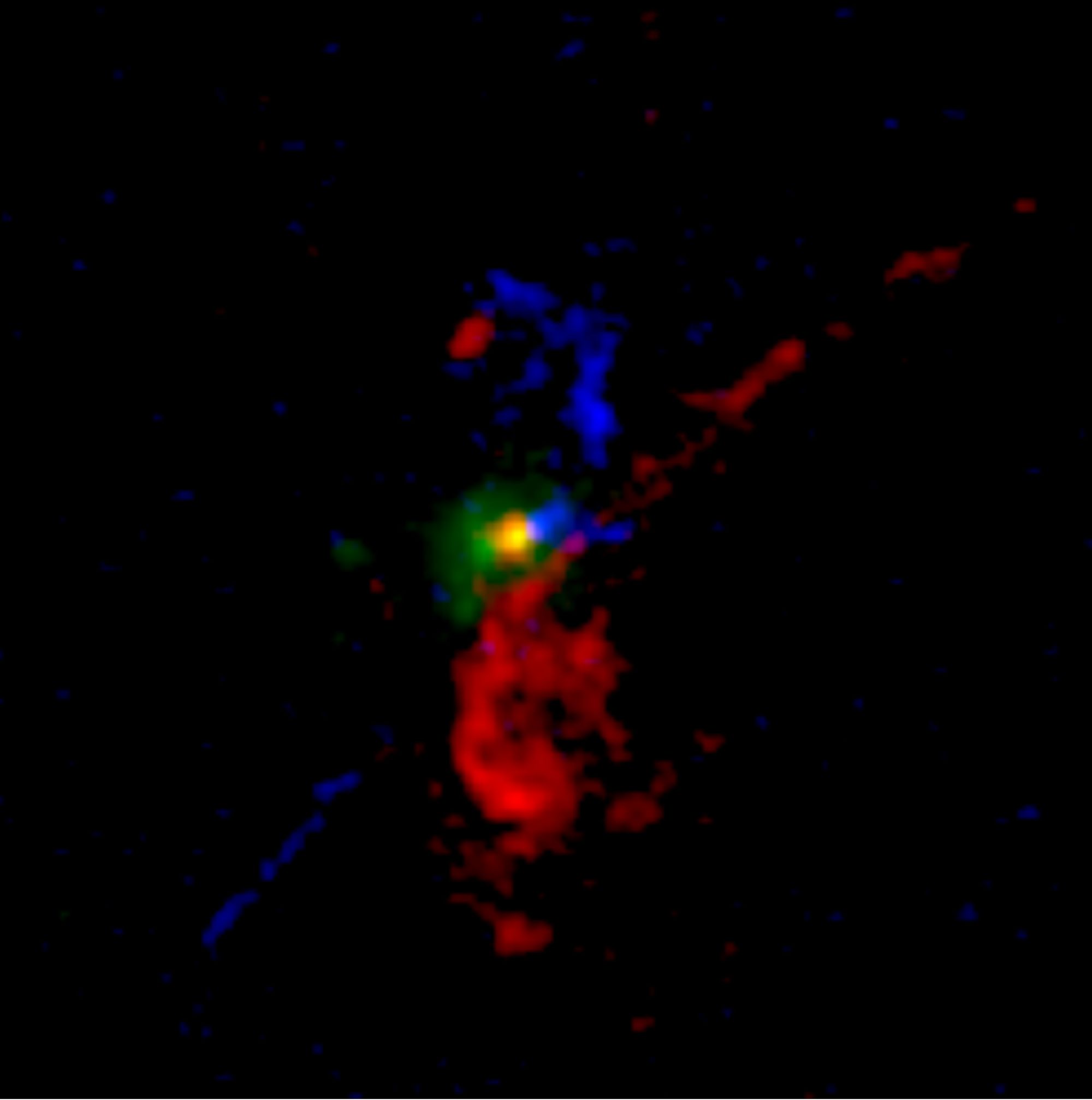 Figure 2： Observed image of G25.82-0.17. Red color shows the silicon monoxide (SiO) emission at the wavelength of 1.3 mm observed with ALMA, showing the receding gas of outflow. The blue is the same as the red one but for approaching gas. In addition to the north-south outflow, there is another diffuse collimated outflow extending toward northwest-southeast directions (top-right and bottom-left directions). The origin of this second outflow is still unclear and hence, it is a subject for a further study. The central green feature shows the dust thermal emission observed with ALMA. G25.82-W1 is located at the very central part of this region seen in the orange color. There are other emission sources in this region, suggesting existence of other cluster members. © 2020- National Astronomical Observatory of Japan (NAOJ)

Impact of this study and future

In this study, we have revealed the complex structure of a high-mass cluster forming region G25.82-0.17 for the first time through the intensive observations with KaVA and ALMA. “The present study is the first step demonstrating the unique capability of our KaVA large program. It will be extended to higher sensitivity/resolution observations through the East-Asian VLBI Network (EAVN) collaboration by combining more telescopes in China, Thailand, etc. ”, commented Tomoya Hirota (NAOJ/SOKENDAI), a Japanese co-chair of the KaVA large program for star-formation studies. “The 40-m Thai National Radio Telescope (TNRT), which is under construction and will be launched in 2021-2022 (2564-2565) year, will be a major radio telescope in the EAVN as one of large telescopes, enabling us to improve imaging quality, sensitivity, and angular resolution. The present scientific result gives us a great motivation to accelerate the collaboration between East-Asian countries and Thailand, and must be one of key sciences in the collaboration with TNRT as well.”, commented Koichiro Sugiyama (NARIT/NAOJ), a collaborator of the KaVA large program for star-formation studies. 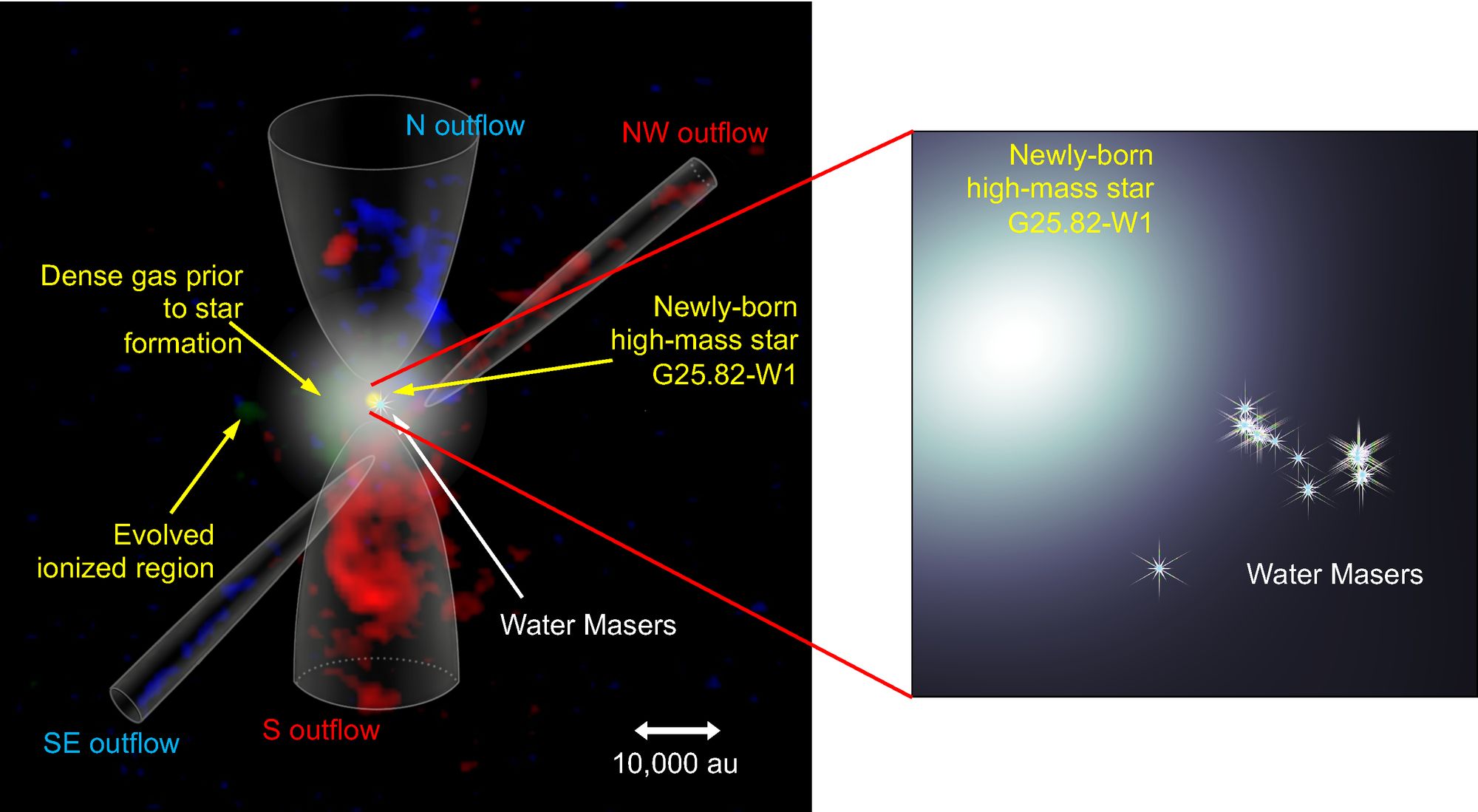 Figure 3: Observed image of G25.82-W1. In the left panel, red and blue images show the intensities of the silicon monoxide (SiO) emission observed with ALMA (Figure 2). They trace the N-S and NW-SE outflows. A newly-born high-mass protostar G25.82-W1 is located at the center of the outflow. There is a group of the water maser emission revealed with KaVA at the base of the outflow. The right panel indicates a close-up view of the high-mass protostar G25.82-W1. Strong water masers are emitted at the close vicinity to the central protostar. © 2020- National Astronomical Observatory of Japan (NAOJ)

The present results entitled ”Multiple Outflows in the High-mass Cluster-forming Region G25.82–0.17” were published in The Astrophysical Journal, vol 896, id 127 (2020 June 20 issue; https://iopscience.iop.org/article/10.3847/1538-4357/ab9100). This research is an international collaboration of National Astronomical Observatory of Japan (NAOJ), SOKENDAI, Otsuma Women’s University, and Yamaguchi University in Japan, Korea Astronomy and Space Science Institute (KASI), and University of Science and Technology (UST) in Korea, National Astronomical Research Institute of Thailand (NARIT) in Thailand, Shanghai Astronomical Observatory and Nanjing University in China, North West University in South Africa, and University of Nigeria. This research was financially supported by the MEXT/JSPS KAKENHI grant No. 17K05398.