Nowadays, radio frequency is important in driving technology such as smart phone, intelligent agricultural applications, unmanned aerial vehicle aircraft, radar, explosive detector, finding a wounded person in a building collapse, automatic driving, development of medical equipment and etc In astronomy itself, a difficult problem is to receive weak radio signals from extraterrestrial objects outside the world over trillion light years The signal strength is less than a hundred million of the cellular signal Therefore, the development of extremely high sensitivity receiver, extremely high performance signal processing system, and extremely high precision instrument is required for radio astronomy applications. The results of the development will have a great impact on all sectors of the public, private, and industries These are the key to success by developing our own technology An important step to be owner technology in accordance with government policy of Thailand 4.0 This development is essential for a specific location for standardized practice and specialized in both engineering and scientific fields for the purpose of transferring knowledge to the public, engineers, scientists, industrials, researchers and university students to apply to their works. The current research and development being carried out are as follows;

Time and frequency reference system plays a very important role in astronomy and VLBI geodesy, where the required stability is in the order of 10-15. Very Long Baseline Interferometry (VLBI) is a technique which emulates a network of radio telescopes, which can be several thousands kilometres apart, as one single aperture to achieve a  incredibly higher angular resolution. Before final data processing at the correlation centre, the incident radio waves at each radio telescope must be sampled at precise and accurate rates using station time-frequency system, which normally consists of one or more Hydrogen Maser and GPS clocks. This VLBI technique allows geodesists to measure tectonic movement, International Celestial Reference Frame, Earth’s Nutation and Polar Motion. 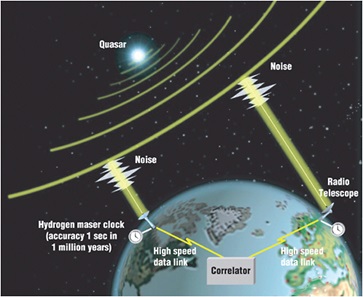 Figure 1: VLBI technique relies on stability of the clock system to accurately measure the radio waves

The Thai National Radio Telescope (TNRT) is capable of both prime- and secondary-focus operations, where the RF  and IF signal from the L-band and K-band receivers, respectively, are immediately converted to digital by  the Digitizers. Via Fibre Optics, the digitized baseband data is transmitted to the Paketizers, which split the baseband into sub-bands and distribute them to processing machines in SPEAD protocol. Each processing machine, equipped with dual Xeon-class CPUs and dual Titan-X GPU cards, performs FFT on sub-banded baseband to produce data-cube or  `filterbank’ files, which contains time, frequency and polarisation information. The filterbank data are undergone online single pulse search for transients detection, e.g. Fast Radio Burst, where a 60-s memory buffer will dump the baseband data to disk on the event of detection. For offline mode, these filterbank files can be pre-processed on-site and transmitted to computing facilities at NARIT AstroPark HQ. For VLBI observation, the digitised baseband is only converted and possibly down-sampled to vdif VLBI standard format and then written to MIT Haystack Mark6 VLBI recorder.

Performance of radio telescopes strongly depends on the perfectness of the reflector surface to their intended designed optics. Ruze’s formula describes the loss as 1/exp(4¶σ/λ)^2, where σ is the rms of the random surface error and λ is the wavelength. This becomes greatly significant at millimetre wavelength. Measurement of surface accuracy can be done with photogrammetry, where images of the reflector are taken at multiple angle to generate a 3 dimensional map, and microwave holography, which requires two sets of feeds for receiving geostationary orbit (GSO) satellites. Surface accuracy measurement from microwave holography is based on the Fourier transform relationship between the radiation pattern of a reflector antenna, which can be obtained from in this case a GSO satellite at optimal 45 degree elevation, and its aperture field, which then can be converted into surface error. Current system of Yebes Telescope, as described in [1], has a spatial resolution and surface error of the measurement of 40 cm and 34 microns RMS, respectively.

NARIT is collaborating with IGN Yebes observatory for the development of an updated holography system with better measurement uncertainty. The system is composed of 3 parts: test and reference feeds (IGN), RF system (NARIT-IGN), digital and software control (NARIT-IGN).

Figure 2: (Top-right) The reference and test antennas received direct and reflected transmission from a GSO satellite. (Left) Block diagram of TNRT’s holography system, which consists of two signal chains from the test and reference feeds, down-converted at the RF&IF module, sent to FFT analyser, and then to a PC which also controls the telescope ACU for satellite scanning (Courtesy of  J. A. López-Pérez, IGN). (Bottom-right) Examples of surface maps in [1] showing improvement over 4 surface adjustment iterations.

Microwave Radiometer (MWR) is a passive microwave instrument for detection of brightness temperature, integrate water vapour (IWV), liquid water path (LWP) on the sky, humidity and temperature profiling. These are important data for further planning of the 40-m Thai National Radio Telescope (TNRT), such as maximum observing wave frequency and observing season. MWR can also be used as a realtime calibrator during observation. 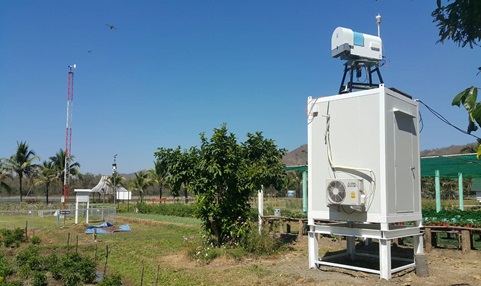 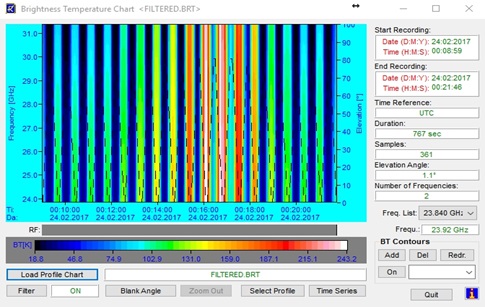 Receiver system is the heart of radio telescopes. A single-feed receiver performs as a single pixel sensor, which is used to detect electromagnetic waves from sources on the sky. The electromagnetic waves in the radio wave and microwave frequency can be distorted and reduced in magnitude by atmosphere. However, weak astronomical signal can be detected by large antennas on the earth with high technology, which has a low noise amplifier (LNA) then the signal can be amplified. For the 40M Thai National Radio Telescope (TNRT), in the next 12 months the L and K-band receivers will be developed jointly between MPIfR and NARIT and installed in early 2019. They will be used for site acceptance test for TNRT for pointing test, antenna efficiency and first light detection. After that the receivers will be used scientific observations, such as pulsars, spectral lines and OH masers. 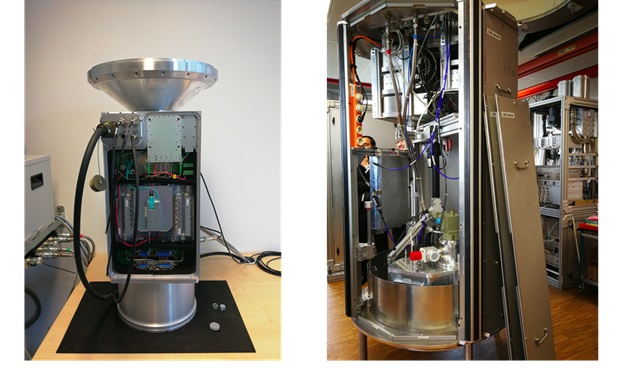 Radio Frequency Interference (RFI) is important for radio telescopes because of the environment conditions are the factors in determining the telescope's performance. For example, telecommunication signals and wireless technology can be more than 15 orders stronger than brightest radio sources. Strong interference may saturate the receiver system, where the response is no longer in the linear regime, and astronomers can no longer put the astronomical information to use. Therefore, RFI is important for identifying interference within the area and for preventing interference with radio telescopes. 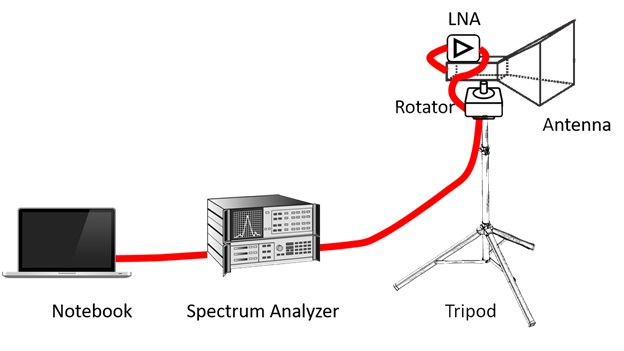 Contact:  Dr. Phrudth Jaroenjittichai    email: This email address is being protected from spambots. You need JavaScript enabled to view it.